HSRL intends to create fast, easy and relaxing rail access to Heathrow Airport from the south by building 8 miles of rail infrastructure alongside the M25 motorway from the west end of the Terminal 5 station.

A further connection to the existing Virginia Water-Weybridge line provides a new, direct link between Heathrow and Woking. As well as transforming Heathrow’s accessibility, this dramatically improves connectivity between Surrey and London for commuters, with new through trains between Basingstoke/Guildford and London Paddington via Woking, Heathrow and Old Oak Common (for HS2 and the Elizabeth Line).  These services could potentially be extended as far as cities on the south coast, for example Portsmouth and Southampton.

“Coming from such an internationally respected organisation as AECOM, this funding represents a significant vote of confidence in our project.

The funding from AECOM will be used for developing the project to the next stage, which will include further stakeholder engagement – vital given that our proposed new rail connection will benefit many communities in the region. This is a significant step forward for the Heathrow Southern Railway, which will be fully financed privately – at no net cost to the taxpayers – and could be operational by as early as 2024.”

David Barwell, Chief Executive, AECOM London said, “We are delighted to announce our investment in Heathrow Southern Rail. As a long-term partner to Government AECOM is delighted to bring its development, engineering and delivery capability to resolve current and future infrastructure needs and to bring private sector funding to accelerate the delivery of critical public infrastructure”

Whether or not a third runway is built, Heathrow is forecast to handle as many as 90 million passengers per year by 2030, up from 76 million today. In addition, many more airport workers will need to travel to and from the airport as passenger numbers grow. The UK Government’s recent M25 South West Quadrant Study ruled out widening the Motorway to handle the additional road traffic, so HSRL’s scheme is designed to provide a more environmentally friendly alternative by attracting passengers and staff from the roads and contributing to improved local air quality.

More about the project is available at www.heathrowrail.com.  An indicative map of the proposed new railway is shown below.

For further information about the project, or about HSRL, please contact: 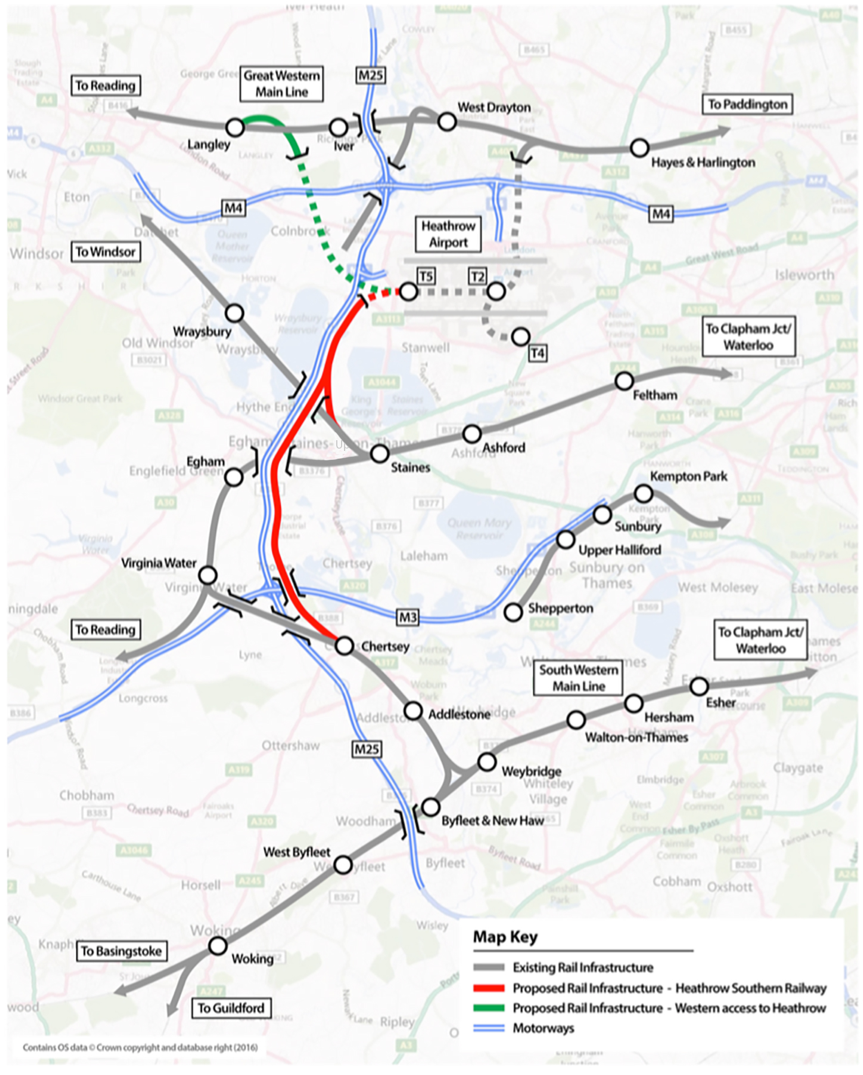 About AECOM
AECOM designs, builds, finances and operates infrastructure assets for governments, businesses and organisations in more than 150 countries. A Fortune 500 firm, AECOM had revenue of approximately $17.4 billion during fiscal year 2016.

For further information about AECOM visit aecom.com or @AECOM, or contact: